So I had this picture up in my Instagram drafts for a week or two now. The text I had put with it: 'make me surrender nature'.
Looking at it having quarantined myself at home for the last couple of days made me realize nature did excactly that. It made me surrender in an unexpected way.

Yes, this is my corona story.

February 29th. I join a group of 50 single people on a wintersport trip to Flachau, Austria. The week is full of fun, snow, snowboarding, apres-ski and sun. Heck, I wear a mouth mask to the proud-to-be-fout party, posing for pictures holding a Corona beer. Very fout indeed.

In hindsight one thing strikes me: the more the week progresses the more people complain about not feeling too well. The busride back on March 7th sounds like a coughing orchestra. And yet, no one suspects anything. This isn't too strange considering the intense strain (a lot of sport combined with a lot of partying) we had put on our bodies that week: a little illness was to be suspected. I broke down in mild fever on the day I got home, March 8th. Slept a lot. The next day I feel better. But a couple of buddy's from the same trip develop high fevers and serious coughs. When they reach out to their doctors and the GGD, they get to hear that Flachau wasn't a corona struck area, so it couldn't possibly be that virus. We all feel relieve.

I get to work on Tuesday, I'm not feeling 100%, but I don't have fever nor am I coughing or sneezing. A cloudy feeling in my head and a burning tickle in my throat keep me highly suspicious though. I'm keeping a distance from anyone I meet.

We all know what came Thursday: heavy measures by the government. I decide to quarantine myself. Strangely, none of the well over 25 people who have symptoms in the wintersport group has been able to get tested past week. I decide to call my doctor and the GGD on Thursday morning and get the same story: your symptoms are not bad enough and you are not vulnerable enough to get tested: oh and btw, Flachau, Austria has not been a dangerzone (even up until March 12 this is what I get to hear!). 'But I'm representing a group of 50 people of which several have more severe symptoms. We need to know.' I hear myself try. It won't help. I won't know whether this tickling/burning sensation is corona or not. And by now it isn't relevant anyway.

By now it's up to myself to make sure, if what I've got is corona, there is no way it can spread to anyone else. However mild the symptoms are for me. I'll be at home for some time.

The lessons I've learned so far are:

I guess all I want to say is: lets take this thing serious. Lets take it as serious as badly I misjudged it previously. 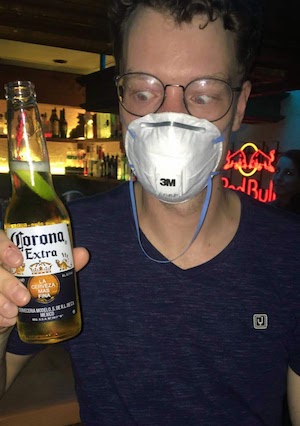 Stay up to date! Get all the latest & greatest posts delivered straight to your inbox

Bas Jongerius — Exploring what its like to be human

Read more posts by this author.

a letter to my parents

millennials are not lazy

why a marathon is so much more than running 42km

a letter to my parents